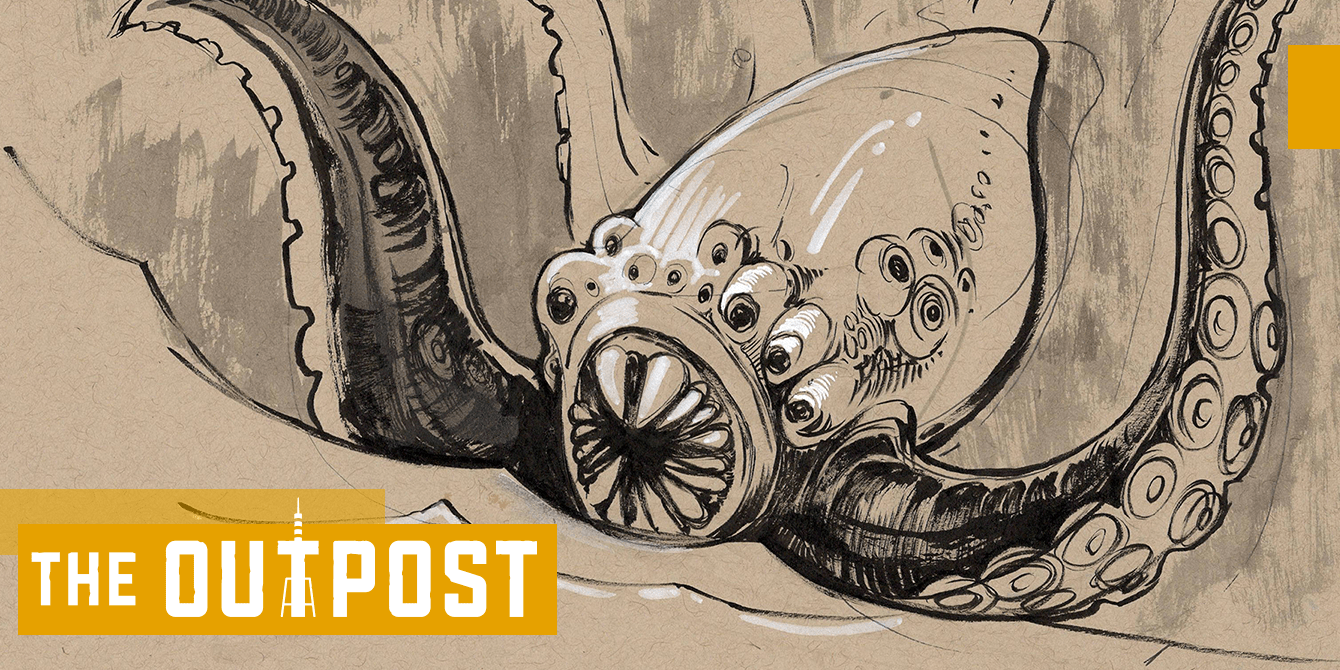 Humans need myths. We need stories. They perform a powerful and useful role in our societies and cultures. If I wanted to teach you about water safety I could give you hundreds of facts surrounding the need for water safety or I could tell you the story of a creature that lives near fresh water and drowns children. Even if you didn’t believe in the creature I talked about, you’d likely have an easier time remembering water safety.

Case in point, there is a myth of a creature renowned for serving as a conduit for keeping kids safe around water: the Kappa. In Japan, this creature has the body of a turtle and the beak of a bird. It’s said to enjoy eating cucumbers, which grow near water, and to drown children. It serves as a cautionary tale, encouraging kids to stay out of the water without supervision.

Myths are the foundation for our cultural knowledge and provide the basis for which we understand our modern world. Often these stories have a kernel of truth in them. Their origins were likely based on a real event, which over time gets lost.

The Origins of Myth

On Amazon Prime there is a show called, “I Wouldn’t Go in There.” The show host travels the globe searching for haunted locations. He interviews people affected by the ghosts and investigates the locations himself. Likely this ghost hunting show will seem like a sharp departure, but stick with me. Relevance is coming.

In every episode, regardless of if he’s investigating the desecrated burial sites of samurai warriors on a naval base in Okinawa, or exploring the haunted and abandoned hospital at Clark Airforce Base in the Philippines, he comes to the same conclusions. While he doesn’t experience paranormal phenomena himself he does come to the understanding that the most “haunted” places have dark histories.

The episode where he bounces through Okinawa? He uncovers the history of inhabitants, fearing attack during WWII, committing mass suicide. Before WWII, the people of Okinawa fought invasion from mainland Japan. The small island to the south of Honshu understands darkness more than most areas.

Those events stay passed down in murmurs, whispers, and stories. Like in the game telephone, each telling of the story causes the narrative to evolve further and further from its origins. The next thing you know, you are told that the open lot on base was originally a samurai burial site, and that the Navy built housing on it. With that inauspicious start, there’s no surprise the rumors mention the seamen slaughtered his family and the home was demolished – leaving an empty lot.

That’s how myths work. They take the whispers and pair them with current events in order to allow us to make meaning.

Since places with the darkest histories are most likely to serve as the locations for myths, hauntings, and generally bad juju, it makes sense to take this line of thought and highlight areas that may be destined to inspire the next wave of urban legends and modern myths. Here are a few examples that may serve as the jumping off point for future generations’ specters and boogeymen.

In Vallicsa, Iowa, in the early 1900s, a family of four hosted two kids to come over for a sleep over after a children’s church service. As they slept, an unknown killer, who would later get linked to over 60 murders, broke into their home and slaughtered all of them. The details are spared here for the sake of those who aren’t into true crime, but are explored in depth in The Man From the Train, by Bill James.

According to James, even though the crime happened well over 100 years ago, locals have no problem telling visitors all about the crimes and the axe used was even on display in city hall through until 2004.

Now? It hosts a yearly haunted house for Halloween and is available for hosting other macabre events. Who knows how this story may evolve through the years as it is passed along, slowly evolving through time into a bizarre myth bearing only a passing resemblance to the original incident.

Travel and Leisure lists this as a haunted place and judging by its history we have plenty of reasons. Just a short boat ride from Venice, this island was used as a place to quarantine plague sufferers. An article from Atlas Obscura reports the government built a building to support up to 160,000 people from 1793-1814.

From 1922-1968, the island hosted a mental hospital where the presiding doctor tortured patients.

Not surprisingly this place is considered a “hot bed of paranormal activity.” These “activities,” and the legends behind them, are likely to compound in the decades ahead.

It’s not surprising that locations with sinister pasts are the ones associated with ghosts and other paranormal activities. But do those hauntings exist or do we impose our impressions on them?

Maybe these are unfair questions. It’s the epitome of the chicken and the egg.

Imagine living in an area during the time of a major event. Perhaps you witnessed the historic Beer Flood of 1814. A giant wave of beer rips down the street when a vat bursts open, flooding basements and claiming nine lives.

After experiencing this, each time you pass the location your mind will trigger memories. You’re likely to do one of two things. You may feel driven to cathartically talk with others who also experience that shared memory, passing the story along through the years, losing key aspects of it through time.

Or, you may rather avoid triggering opportunities and completely avoid the area. If enough people do this, it will allow silence to fall and stir the imaginations of those who do visit. In these situations, the tiniest facts prove to be hearty seeds growing into sinister creatures.

As part of our evolutionary process, we harnessed our minds and turned them into meaning-making machines. Or, at least some of us did. I’m not sure about a few of you. We learned to read the clouds and linked the sky turning a sickening green to being a warning of tornadoes. These clouds gave us the warning to take shelter.

Studying plants we developed medicine, recognizing that in small doses hemlock helped treat a range of conditions from anxiety to painful joints, but delivered in larger amounts shuts down the voluntary and involuntary muscles (like breathing).

When we make connections, we credit our intelligence and pattern-finding abilities. But we are prey to pareidolia; mistakenly seeing patterns that aren’t there.

So how does this relate to ghosts?

Visiting a place with an infamous past primes your brain to make connections. If we visited the home of Lizzie Borden (famous maybe-axe-murderer) and heard the sound of an unlatched gate drumming against the catch in the wind, we might misattribute that sound to what we perspect as an axe.

Now, imagine being stationed at that base in Okinawa, where all of the natives live with the dark history. You hear murmurs about the same land you live on being linked to this darkness, then when anything happens you link that crime to the past.

We see similar things occurring with conspiracies. With our brains programmed to make connections to keep us alive, none of us are immune to making these same leaps in logic. With conspiracy theories, the more personal trauma we’ve experienced the more likely we are to credit sinister motives.

On a societal level, crises cause a wider spread adoption of conspiracy theories.

So as individuals who’ve undergone trauma, we have the ability to make leaps and see correlations where there is no link. As a broader group, during crises we see upticks in adoption of these same leaps in logic.

Taking humans out of the equation for a moment. Let’s analyze how environments shape our understanding before looking back and tying everything back to mythology.

The physical environment we grow up in impacts the types of myth we cling to. For ancient civilizations, if you lived in a climate granting you long growing seasons and abundant food your culture’s myths (and sometimes religions) reflected that.

For people growing up in the fertile crescent, that land between the Tigris and Euphrates rivers, the gods were benevolent. Moving much further north to the Nordic religion of the Vikings, living was harder. To survive, the gods needed appeasement. People needed to offer sacrifices.

Looking at ancient myths and gods and goddesses through this lens is fascinating. Recognizing entire belief systems correlated with the climate of regions allows us to dig deepers into psyches of ancient peoples.

It also allows us to zoom out even further on the scope we’ve been looking at pattern finding and recognition.

As individuals we struggle to make meaning out of lists of facts, but stories allow us to retain information better. If we’re able to identify with the characters of the story, then we find ourselves even more likely to heed possible warnings.

Our brains are extraordinary machines. We are able to figure out all kinds of correlations. Moldy food – bad. Yet, some molds can be used as medicine.

When linked with other humans this ideation continues. What starts as one person seeking an answer ends up with a group searching for meaning. That collective brain power is often able to process data and generate answers. The more people involved the greater the connections that are made.

The Creation of Myth

How these myths come to be starts to makes a lot of sense with these perspectives.

We live in ancient times, when ships often get lost at sea during storms. Later their crushed wreckage washes ashore. We’re left, frightened by forces beyond our comprehension, struggling to understand how large solid vessels break into fragments.

We leap from believing that waves smashed the ship. We imagine a creature rising from the depths, wrapping long tendrils around the boat and squeezing the bow until it shatters. The loss of life these vessels present cause our brains to imagine monsters as reason. We can’t bear these events as the result of high pressure systems or seasonal patterns.

Over time, we might make the connection that the Kraken strikes during the stormy season and use this to inform our travels, restricting them to the summer months. Personifying the devastation of the storms as a beast causes us to remember the cost of ignoring the signs. This need for myth allows us to record and recall the data housed in the tale.

The Evolution of Mythology

However, when tragic events occur and when the random chaos creates havoc, these same meaning-making machines can fail. Over time, details get lost. We lose key pieces of information.

What starts as a straightforward failure in a vat of fermenting beer, could develop into a darker path. As we stand in spaces where people suffered, we’re likely to retain that suffering, even if only in fragmented stories used to house snippets of the tragedy. In those spaces, a draft causes us to reflect back on that darkness.

Suddenly the normal sounds of a house settling, startle. We link the awful news the realtor told us to a poorly hung shelf that caused a stack of plates to fall.

The house is haunted.

But is it? Or is the house a personified sense of the darkness in people’s souls? If that’s the case, then in years to come when the details of the events of what happened in Villisca, Iowa fade, we’ll find ourselves left with the myth. We’ll see the Boogeyman used to instruct people to lock doors and windows.

Mythology reminds us of the myriad of details we need to survive. Without these stories, we’re left with lists of facts without the narratives that allow us to retain the true lessons. The stories themselves allow us to identify with the characters and understand how cause and effect are linked. With the narrative framework, we’re able to apply that same story to our lives and draw parallels.