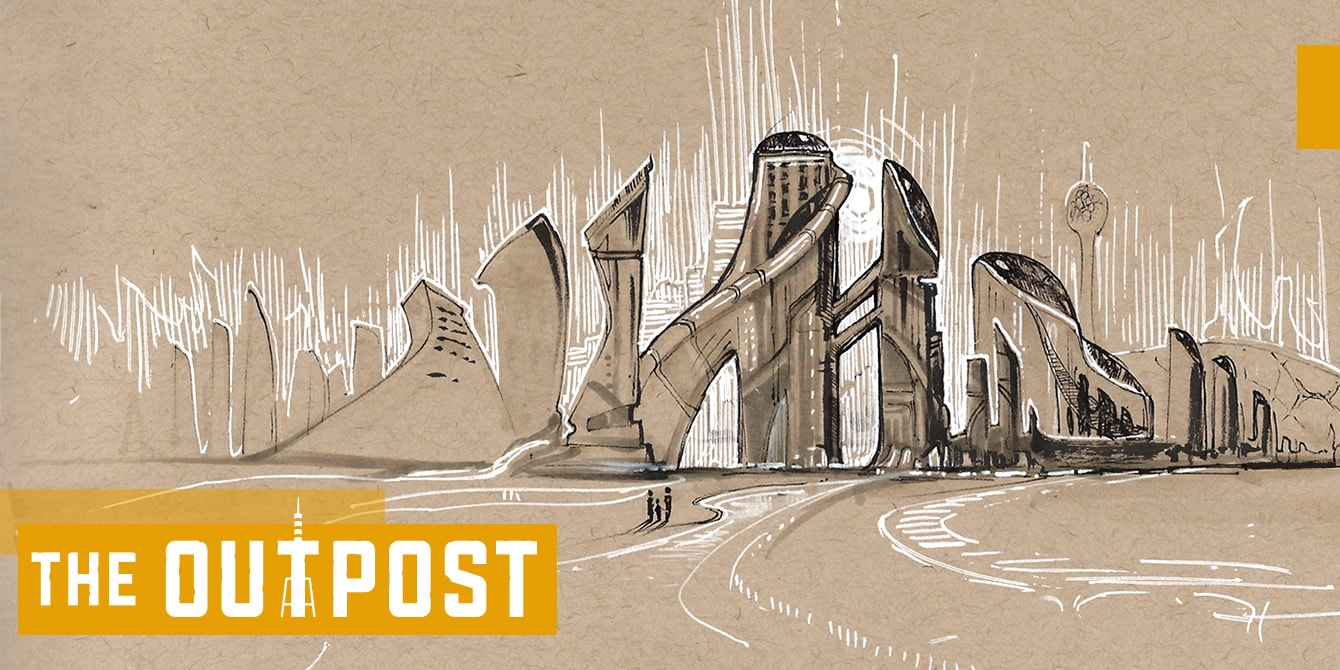 The Hunger Games. 1984. The Handmaid’s Tale. Dystopian novels and stories comprise a vast swath of our entertainment. But what about utopian tales? Could you, without searching, name three utopian works?

What is it about dystopian literature that fulfills something deep within us? Do we simply believe we live in the current incarnations of Mad Max? Or does the consumption of these works help us work out a deeper unseen need?

For whatever reason, I found myself really attempting to break down our need for utopian/dystopian stories. I believe that what I learned along the way shapes how we choose the stories we indulge in.

What is a utopian novel?

Utopian societies eradicated problems like hunger, homelessness, and war. Humanity seems to be on the up-and-up and this freedom offers protagonists the opportunity to explore deeper aspects of themselves. They can evolve and become their best selves.

Think of Star Trek as an example. The Federation allows all life to work together and promote peace. Obviously, there are issues with other races who are in conflict, but we follow the crew as they try to resolve them.

While Star Trek is a recent example, the utopian genre hit its peak in the 18th century. During this time, four types of utopias proliferated.

First, we have paradise. This environment allows protagonists to simply exist elsewhere and achieve the perfect world. Think of: deserted islands, portals to other dimensions, or off-the-grid communities — we aren’t judging.

The second major type of utopia is one where the world has been altered somehow by a natural event. Imagine a world where the best-tasting food manifests on plates right within your reach. Now without struggling to find food you had the freedom to achieve your potential. While I’ve yet to find a piece of literature where it rains Philly cheese-steaks without becoming a stinky nightmare, I can still dream.

Another common theme of utopias is one where we see willed transformations. Instead of nature magically giving us delicious sandwiches we see humans creating incredible achievements which perfect the world. Star Trek fits here, or it would without the final example.

The final type of utopia is the result of a technological transformation. If we could build the matrix and not have our energy harvested by robots, but instead produce a happy environment, this is what it would be.

… but this brings up an interesting point. In The Matrix, a perfect world without suffering was rejected by the hosts. They couldn’t believe a world without suffering existed. People needed suffering to maintain their connection to the system, resulting in a dystopian world existing both within the matrix and outside in the barren wasteland of the world.

In one of the first English novels, Daniel Defoe pens the story of Robinson Crusoe as he gets shipwrecked on an island and scrapes together to make a life before getting rescued. Basically, it’s the story of Tom Hanks’ movie Castaway.

So what, exactly, makes this a utopian novel?

Well, it boils down to Crusoe’s mindset toward his experience while he is there. He describes his time on the island as being free from lust. He credits God with his survival and makes the most out of his island time. Tom Hanks on the other hand, struggles to survive and misses human companionship to the point where he spends a chunk of the movie chatting with a volleyball.

Interestingly, it seems like the major reason Castaway and Robinson Crusoe differ has to do with the events leading up to their creations.

While utopian literature existed since Plato penned The Republic in 370 BCE, something special happened during the 1700s causing the genre to really take off. All over the Western world thoughts and ideas were popping up. Great minds started questioning accepted reasons for why things were the way they were.

Western civilization had just finished the Industrial Revolution and was heading towards The Enlightenment. This movement would spawn the creation of the scientific method. People saw how the world could change and more importantly, how it could improve.

Coming in at the start of the Enlightenment, Issac Newton printed “Principia Mathematica” in 1686. Voltaire wrote a series of essays called Letters on the English, where he looked critically at the French monarchy by comparing it to the time he lived in England, leading people to question the divine right of kings.

Keep reading about the importance of stories in our lives. Check out the Importance of Myth.

We began to explore what a perfect world would look like. This concept that we didn’t need to accept the established views affected literature. This new genre served those with access to books as a means to escape the darker aspects of the times too.

Just as the leading minds of the time were opposing the establishment, 1740 saw a devastating famine in Ireland, killing 20% of the population. Five years later, Scotland experienced the Battle of Culloden, during which James Stuart’s bid for the throne of England was defeated. This also marked the end of Scottish highland culture.

This build-up led to the American/French/Haitian revolutions. No wonder! We, well our ancestors were looking at the world and asking ourselves, “What else is possible?”

Part of this question is perfectly attuned to exploring options through literature.

While the first piece of utopian literature is thousands of years old, newer utopias have entered pop culture. Although we have already mentioned Star Trek, it is a fascinating example. In the series where a galactic group of cultures joined together to promote peace, another group exists offering a darker view on membership.

Contrasting the Federation, the Borg capture peoples and use technology to assimilate them into the Borg way of life. In efforts to gain knowledge through amassing bodies, the Borg overwrite free will, putting them at odds with the protagonists.

Wonder Woman hails from the Amazonian paradise of Themyscira. While it is common for comic utopias to topple in a single story arc, this one survives, making it the longest-running utopia.

Another comic utopia, Wakanda paints a futuristic society coexisting with our world, albeit without our knowledge. This is a perfect example of a transformational utopia. Here man uses technology to create a society and lives in harmony with their surroundings.

After explaining how philosophers from the Enlightenment led to the proliferation of the utopian genre, it’s no surprise that a couple of world wars, nuclear bombs, and a couple of pandemics have paved the way for the dystopian narrative.

But what psychological need do these stories fill?

We explored how our questioning of the divine right of kings led to revolutions as we explored possibilities of hope and paradise, but what does Mad Max help us understand?

Dystopias allow us to set up a foundation for resistance. In these stories, we are able to see gross injustice and often watch characters overcome these situations. Even a former member of the Borg, Seven of Nine, proves it is possible to leave a dystopian society and transition into a utopian one.

Role of Dystopias in YA Lit

This foundation for overcoming adversity from a psychological perspective provides the perfect line of thought for why this genre is so abundant in the young adult literature realm. As children grow up, they are facing the turmoil of coming of age, puberty, and living in a world that feels pretty unstable.

It’s no wonder the bookshelves are packed with works like The Giver and The Hunger Games.

These novels help provide schemas to cope in a world of uncertainty. The Giver starts in what is viewed as a utopian world only for the main character to get hit with the knowledge that his community is deeply flawed. Its perfection is based on eliminating free thought and diversity.

The Hunger Games shows kids who are forced to murder each other to prevent further uprisings. If children can overcome this level of oppression, struggling with issues of cyber-bullying and peer pressure should be a cakewalk.

Pop culture is filled with post-apocalyptic narratives. Even Disney’s feature film Raya and the Last Dragon takes place in a land broken by human weakness. As dark as the environments of these stories is, we can learn a lot about the continuation of this type of tale.

These stories highlight strife and discord while providing us the ability to see ways to rise up. Our need for hope is shaped by the various pieces of pop culture we consume. The darker the story, the greater the hero needed to overcome the obstacles.

We all want to believe that we have this innate power within us to create a better world and I think deep down while we dream of utopias, we are jaded by current events. Even if we made it to the Amazonian island Themyscira, we’re likely to feel the pangs of survivor guilt and leave. Perhaps we can use our somber views of the world to generate large-scale change.

We are in a moment of time where we have the capacity to usher in a second wave of the Enlightenment. Our innovations in technology and thoughts on improving the human condition could provide the cornerstone of utopian literature giving our children islands of opportunity in their imaginations. In theory, these changes could drown out the dystopian voices lining the aisles of the young adult sections of bookstores and replace them with dreams of building robotic friends with their own intelligence. These dreams could lead to the literal creation of the Federation. They could empower our children to boldly go where no man has gone before.